Learning has never been more interactive and interesting before the integration of Augmented Reality. Well, I am a firm believer in the power of technology. In this tech-driven world, just the pen and paper method is not sufficient for learners. Integration of technology has evolved from a good-to-have aspect to a must-have aspect. AR educational apps have taken education to a whole new level by offering concept-based learning. Augmented Reality has revolutionized industries. Technology is an ever-changing field. Now and then new technologies are introduced. Some, are more desirable some little less. Some stay for longer and reshape the workflow others a little less. One of the most robust and innovative technologies of this era is Augmented Reality. Industries are quick to embrace this immersive technology.

Education has evolved a lot over the years. With the increasing advancements in technology, it is easier to get over the habit of cramming everything. Technology helps learners to build the concept and give detailed insight into the topic. AR educational apps are making learning more immersive. Here, I will mention the best AR educational apps for learners from KG to a higher level.  You can check the best AR apps of 2021 here. The shift to digital space due to pandemic has spiked the need for AR education apps. It changes the way we view the concept. AR educational apps are the best way to engage learners and offer quality information. Students can interact with the content. And who doesn’t enjoy interactive learning! 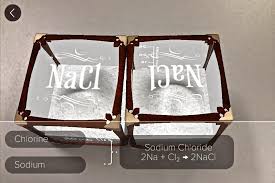 Elements 4D AR educational app is designed to make the learning of periodic table easier and interactive. It offers a new approach to make learning informative and fun. There are 6 different blocks in the app. All the blocks are engraved with different symbols of different elements. When you point your camera to the block the AR technology transforms it into a piece of graphical information and you can see the reactions. Suppose a block has H and other O you can see H2O forming from Hydrogen and Oxygen. It makes the entire process interactive and immersive. Elements 4D app is developed by Daqri that aims to “ bring Augmented Reality to the masses”. Daqri CEO Brian Mullins says “we wanted to design a product from the ground up that had augmented reality at its core. U until now it’s been layered on top of something and more of an afterthought”.

The app can be used by android as well as iOS users. You can enjoy learning the periodic table with the help of Element 4D here. You not only learn the names of elements but also can easily remember reactions between elements. It offers an effective demonstration and improves the speed of learning as well as retaining the ability of learners.

Aurasma is an AR educational app available for android as well as ios users. It is available as a Software Developer Kit (SDK) as well. The app has been in the market for nearly a decade now. The app is being used for educational as well as personal usage, it allows users to manage content on its own. It develops creative and cognitive development skills in users. 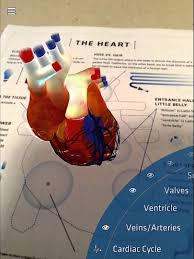 Anatomy 4D developed by DAQRI uses Augmented Reality to help students interact with the human body. Now, it is easier to visualize the working of the heart, stretching of the muscle, bolus movement, and much more. This cutting-edge technology has made knowing the human body interactive and amazing. The app is widely used by medical professionals, students, and teachers to have a better understanding of human anatomy. To use the app you need to downland and print posters in colored format. Then download the Anatomy 4D from google play store or Apple app store.

This AR app aims to cultivate team playing skills in kids. It is fun to use the app and play an educational game The game pieces are required to use the app, which is sent via email address. You need to download it, print, and cut the pieces before the kid starts playing with this AR educational apps. To get the correct pieces of the game players need to solve mathematics problems. The app is recommended for kids in first and second grade.

the app is limited to the iPad and iPhone. It is recommended for learners of 7 to 15 years old. The app makes science posters come to life and give a real-like feel. You need to download the Science AR poster to use this app. Point the camera of your phone on different parts of the poster and have an amazing augmented experience. 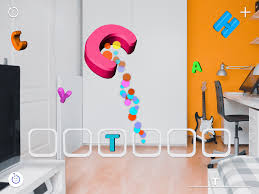 Catchy word, a word game AR app is one of the best AR educational apps for kids trying to learn spellings. The app makes learning colorful, fun, and immersive for android and iOS users. The app encourages kids to walk around and catch letters with the device to form a word. The developers say “Players need to walk around and touch the virtual object with their actual device that acts as a connection between the virtual and real world” One of the best features of the app is, it offers support to several languages such as English, French, German, Spanish and Russian.

Augmented Reality is an evolving technology and more and more individuals are getting engaged with it. It has become one of the most viable medium to reach audiences. It is easier to connect with students using AR educational apps and make learning interesting. Would love to know your suggestions!

What Is The Future of Augmented Reality In Education?

List of Best AR apps for Android and iOS in 2021

Augmented Reality for kids-usage and applications!